A cheerleader at a Missouri high school says the athletic department is blocking her from joining her team on the field this year ... because officials claim her wheelchair might damage the football turf.

Lacy Kiper -- who was born with Osteogenesis Imperfecta Type 5 that breaks her bone easily -- told FOX 8 that this would have been her second year cheering, but Truman High School is keeping her from being with the team.

The reason behind the school's restriction -- Lacy claims she was told it's due to her wheelchair potentially damaging the turf.

"They didn’t want my wheels, I guess, to be too heavy and damage a little bit of the turf for me to get stuck in it," the 18-year-old says.

"But, even for the basketball gym, they said no. And I was like, 'That’s a floor that I go on all the time.'"

Lacy's father, Charles, is totally against what the school is doing ... but told the outlet he is willing to do anything to allow his daughter to join the team on the field this season.

"I told the school I would put her on the mats if they want, I will be there at every game if they want," Charles says.

"I'll make sure that she's got someone to assist her in anyway to be a part of this team and they have pretty much turned me down on most everything."

The Independence School District released a statement on the matter ... saying it cannot explain its side of things due to not having consent from Lacy's parents.

"The District cannot substantively respond to such inaccuracies without consent to release student records from the parent. In this matter, the parent chose not to sign HIPAA and FERPA releases to allow the District to respond."

"Without those releases, the District is limited in what it can discuss. While the Independence School District cannot respond substantively to the editorial, the District would like to reiterate that it takes the safety of all involved in our activities seriously, and remains committed to ensuring that our programs and activities are inclusive, safe, and welcoming for all students." 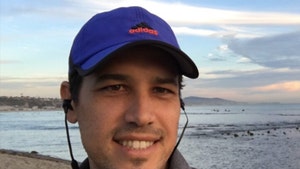 You Might Want to Rethink TMZ Sports Kids Controversial S#!T