Grab a tissue, 'cause this video will hit you right in the feels.

A soldier came up with the ultimate surprise for his son after returning from overseas ... by suiting up as a referee and revealing himself prior to a high school football game this week -- and it's amazing!!

Army Major Fred Grooms Jr. is back home for 30 days after reportedly being deployed in Kuwait for the past year ... and as his son Fred III and the Helena H.S. JV team showed up at the 50-yard line for the coin toss, he pulled down his mask to show his identity.

Fred III was clearly shocked ... walking up to his pops and shaking his hand before embracing him with one of the warmest hugs you'll ever see.

9th grade Husky Fred Grooms got a big suprise from Army Father Returning after being away a year. Thank you for your service Mr Grooms and we are glad you are home! @AHSAAUpdates @WBRCsideline @abc3340sports @RickKarle @cbs42 @Helena_AL_HAA @HelenaHSSports @HelenaHSSports pic.twitter.com/jUyyRsggPe

Naturally, the surrounding refs loved the touching moment ... and the crowd in the stands clapped and cheered as they watched.

Fred Jr. now gets to spend the next few weeks making even more memories with his son before being redeployed for another year.

Awesome ... and thank you for your service, Major!! 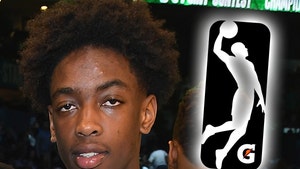