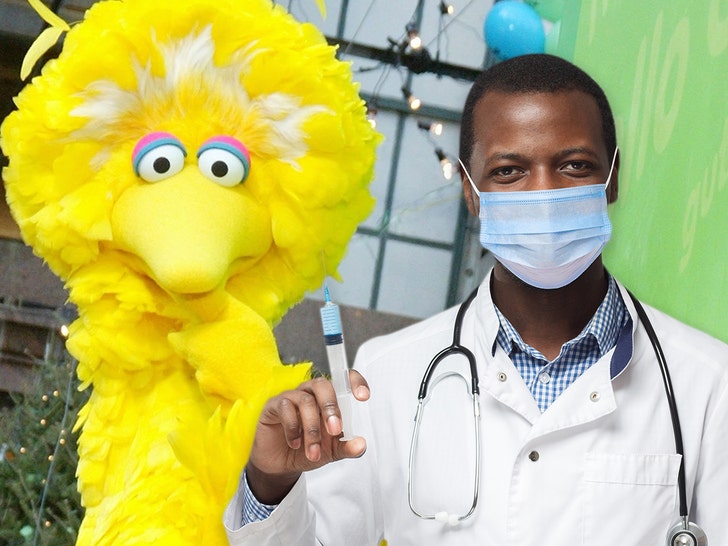 Big Bird is one of the first on Sesame Street to get protection against COVID-19 -- and while some might question why he's late to the party ... the timing makes sense for his audience.

The 8-foot costumed character made the big announcement on Twitter Saturday -- the first time he's tweeted from his account since March. So, yeah ... major development for the reclusive BB.

I got the COVID-19 vaccine today! My wing is feeling a little sore, but it'll give my body an extra protective boost that keeps me and others healthy.

Ms. @EricaRHill even said I’ve been getting vaccines since I was a little bird. I had no idea!

Big writes, "I got the COVID-19 vaccine today! My wing is feeling a little sore, but it'll give my body an extra protective boost that keeps me and others healthy." He adds, "Ms. @EricaRHill  even said I’ve been getting vaccines since I was a little bird. I had no idea!"

No photo proof or anything showing Mr. Bird getting his jab, but we'll take him at his word here ... and even give him props for spreading the word on vaccine awareness.

It’s happening! @drsanjaygupta and I are back with our friends from @sesamestreet for a new Town Hall answering your Qs. Join @elmo @BigBird Rosita and some special guests TODAY 8:30a ET @cnn. So excited to meet @KizzyPhD! pic.twitter.com/s1Tf1NRGbY

Now, if you're wondering why he mentioned CNN's Erica Hill specifically -- it's because she and other CNN personalities hosted a "town hall" Saturday morning called "The ABCs of Vaccines," which featured a number of 'Sesame Street' puppets talking 'rona and the shot.

Of course, that includes Big Bird too -- and the reason they're all being recruited to even talk about vaccines at all is because the Pfizer jab was just approved for kids between 5 and 11 the other day ... and the government is encouraging parents to inoculate their children.

The Covid vaccines for kids are here. Join @DrSanjayGupta, @EricaRHill, @BigBird and friends for The ABCs of Covid Vaccines - A CNN/Sesame Street Town Hall for Families - this morning at 8:30 a.m. EThttps://t.co/Kcjua8x3FE pic.twitter.com/bOgnUEp1z1

So, no Big Bird hasn't been holding out or "doing his own research" with vaccine hesitancy -- it's just that his core demographic is now eligible, and he wants to encourage them (and their parents) to get it done. Also, he's apparently only 6 years old or something? 🤷🏽‍♂️

We'll see if parents can be swayed or not though ... as we're seeing more and more, many are firmly against vaccinating their kids against COVID, despite Big and co.'s best efforts.