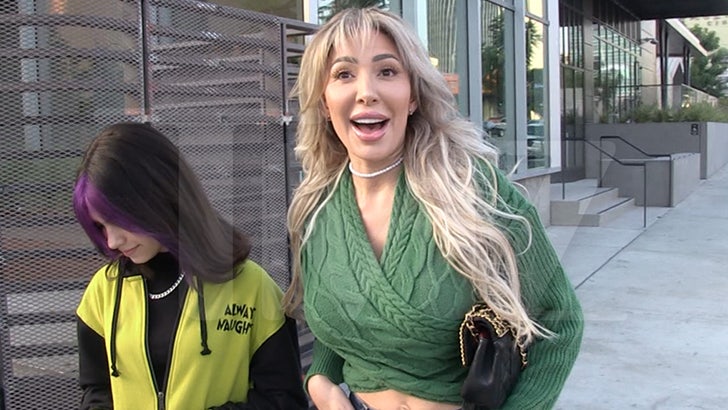 Farrah Abraham's return to the 'Teen Mom' franchise promises to be nothing short of dramatic and, apparently, punchy too ... so says the OG herself.

We got FA in L.A. talking about the new spinoff she's part of, "Teen Mom: Family Reunion" which is set to premiere next month. Sounds like the time she spent filming with much of her old costars was a bit of a mixed bag -- based on what she's telling us here, anyway.

Check it out ... Farrah tells us getting back into the 'Teen Mom' world was a bit surreal, because she thinks a lot of the folks who are still partaking are remnants of the past -- something she was trying to propel forward with her appearance.

Doesn't sound like that push to embrace growing pains was met with open arms because she tells us things actually got physical at one point ... with multiple ladies.

It may have made for good TV in the moment, but Farrah tells us she didn't appreciate the squabble in hindsight, due to COVID ... and, y'know, generally not wanting to throw hands unnecessarily.

Still, she makes it seem like this new season's gonna be chock full of drama and (hopefully) some heart-to-heart talks with the original crop of teen moms... who are all grown up now. The new series premieres on Jan. 11 on MTV.