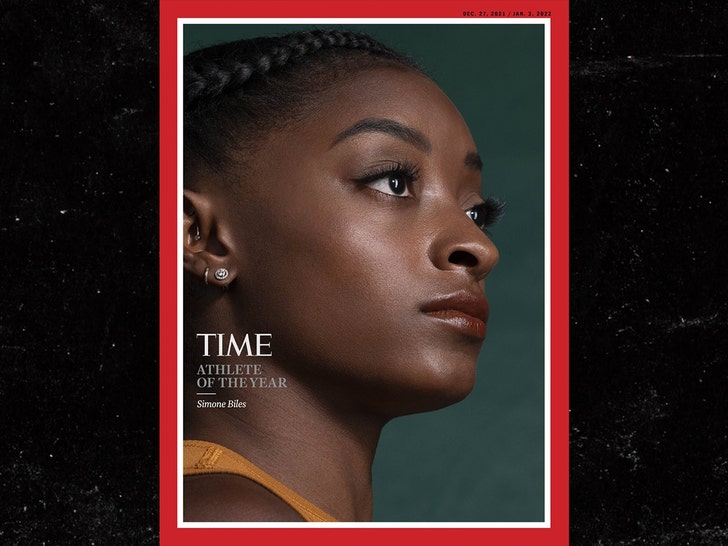 The "Athlete Of The Year" isn't Super Bowl champ Tom Brady or gold medal-winning gymnast Suni Lee ... it's Simone Biles, according to Time Magazine, who ironically receives the accolade for NOT performing.

It's a controversial pick (check Twitter) by Time ... who selected the 24-year-old, 4x Olympic gold medalist as the recipient of the prestigious honor.

Of course, Biles pulled out of the 2020 Tokyo Olympics after struggling with mental health issues, including the "Twisties" -- where a gymnast becomes disoriented in the air (dangerous when you're tumbling in the air) -- causing her to pull out of the Games.

At the time, Biles tearfully explained her decision to withdraw, explaining she was seeing a therapist to help battle her "demons," saying "I have to focus on my mental health and not jeopardize my health and well-being."

One of the most remarkable mixed zone press conferences I’ve known. In which Simone Biles described pulling out of tonight’s team event because she had to put her mental health first. Says she was inspired by Naomi Osaka among others #Olympics #ArtisticGymnastics pic.twitter.com/p3Rli5S7J0

Biles was widely celebrated by fellow athletes and fans across the country for putting a spotlight on mental health.

However, there were also detractors who say Biles flat-out quit on her team and country ... insisting there's nothing to celebrate.

Count teammate Suni Lee -- who recently was named "Athlete Of The Year" by Sports Illustrated (along with swimmer Caeleb Dressel) -- firmly on the side of those who say Biles positively changed sports forever.

“What Simone did changed the way we view our well-being, 100%. It showed us that we are more than the sport, that we are human beings who also can have days that are hard. It really humanized us.”

And, Biles is adamant she wouldn't change a thing about how she handled Tokyo.

“I was torn because things weren’t going the way I wanted," Simone told Time, saying, "But looking back, I wouldn’t change it for anything.”

Simone Biles "Athlete Of The Year" ...