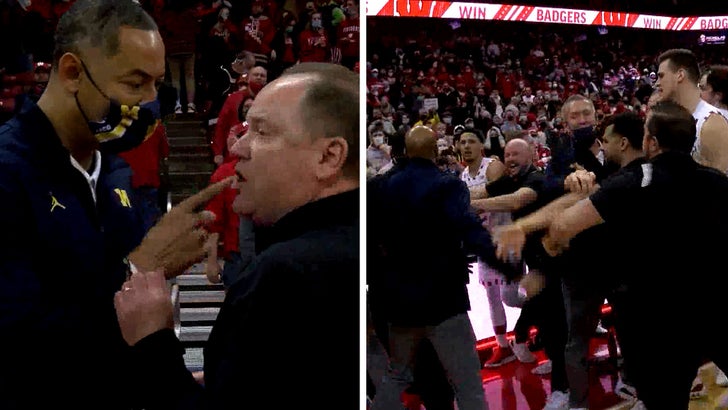 12:51 PM PT -- Howard has an explanation for why things escalated the way they did, telling the media ... the fault lies with Greg Gard putting hands on him first.

Here's Juwan Howard's side to the story.

Added later that he felt he needed to protect himself, because Greg Gard touched him unnecessarily in the handshake line after he had gotten upset.#Badgers pic.twitter.com/hFWrEtBv1v

During a post-game press conference, JH said he was expressing his frustration to Gard about a late-game timeout he'd taken -- at which point, Gard started to touch him in a way that Howard felt was totally unnecessary.

Sounds like he's claiming self-defense -- but the fact is ... he took the swipe well after Gard was removed from the situation. Many suspect a suspension against Howard is forthcoming.

Juwan Howard got physical with another coach after his team’s bitter loss in a basketball game ... kickstarting an ugly fight.

The University of Michigan’s men’s basketball head coach got into it Sunday while shaking hands with the opposing team ... the Wisconsin Badgers, who beat Juwan’s Wolverines 77-63 in a hard-fought game.

While UoW’s HC, Greg Gard, approached JH in the lineup ... he appeared to get snubbed by the latter -- which made him start to get in Juwan’s face, as the two of them began yapping back and forth.

Soon, it became clear this was going beyond words ... as other coaches and players had to rush between them to break up a head face-off. Juwan wasn’t done yet though ... in an apparent effort to reach Gard, he took what looked to be an open-hand swing at one of the Wisconsin assistant coaches, and made contact. It was all caught on camera, of course.

That sparked more fighting from the players, and an all-out brawl ensued.

Fortunately, it doesn’t seem things got too out of hand ... and the chaos was eventually tapered down after everyone separated from one another.

Things got very ugly at the end of the Michigan Wisconsin game. pic.twitter.com/prbzRAGlgt

No word on what exactly made Juwan react that way -- or what sort of punishment, if any, awaits him. 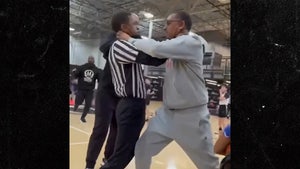 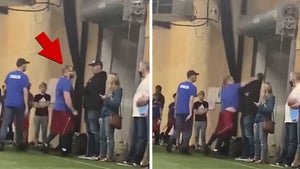