Bill Maher thinks Elon Musk is worried about population collapse because it's a convenient excuse not to wear a condom ... it was a jk, but his point is ominous. Stay with us.

Bill is back on 'Real Time' after a month's hiatus, and he used the occasion to talk about the ridiculous push to add more people to planet Earth. We are now at 8 billion and counting ... the head honcho at the U.N. is celebrating and welcoming the diversity that comes with it, but B.M. couldn't be more scornful, and he's got a solid point.

Aside from climate change -- which is undeniably real, despite the climate deniers -- we are losing our resources, and the math is simple. More people = fewer resources, like food, trees, sand, you name it ... there'll be fewer of all of it, and eventually, it's gonna run out.

And, that brings him to Elon, who has worried out loud that we are in a world crisis because our population is tanking. Huh, Bill asks?

As he puts it, people who think we'll figure out the whole resource thing are like the people who are pushing BitCoin ... "We haven't thought it through, but who cares?" 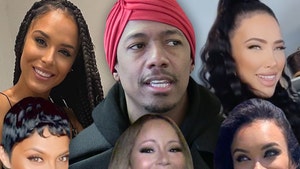