Drake is saluting Rod Wave's skills as a nonverbal artist ... after the Florida rapper admitted his verses weren't good enough to make the cut of their proposed collaboration.

Back in 2021 when Drake was releasing his 3-song "Scary Hours" EP, he originally asked Rod to hop on a song for the mini project.

In a new interview with Complex, Rod admits he sat with the instrumental for weeks ... hoping for a creative spark to fuel an iconic moment but nada, nothing, zip -- came to mind.

Rod says he basically idolized Drake as a youth and felt bad about eventually declining the collaboration ... but felt confident in his decision to say no.

Drake respected the move so much, that he told Rod publicly in a comment for the interview!!!

The song would eventually still become a hit in the form of the "Lemon Pepper Freestyle" with Drake eventually swapping out Rod's spot for another Florida rapper ... by the name of Rick Ross.

Rod's not tripping — his Drake feature may be still loading but his long-delayed "Beautiful Mind" album just dropped with appearances from Jack Harlow and December Joy! 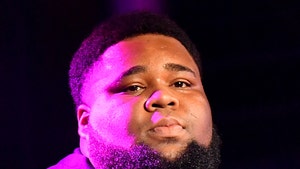