Ringo Starr's sudden weekend illness was actually the beginning stages of COVID -- and now, the former Beatle has been forced to hit the pause button on performing.

The announcement came Monday from The Canada Life Centre -- where Ringo and his band were scheduled to perform this week -- writing ... "Ringo Starr and his All Starr Band were forced to cancel their recent shows due to illness. It has been confirmed today that Ringo has Covid and the tour will be on hold while Ringo recuperates."

Ringo hopes to resume as soon as possible and is recovering at home. As always, he and the All Starrs send peace and love to their fans and hope to see them back out on the road soon.

We send him and everyone on the tour our best wishes.

They add, "As of today the Canada Life Centre show on October 4 has been canceled," while going on to explain that he's recuperating at home and hoping to return to the stage soon.

Ringo's been on tour, and he's got a string of shows coming up that, for now, seem to be getting pushed -- including five Canadian dates through Sunday ... which were due to kick off in Winnipeg. Starting next week, he's got more shows here in the U.S.

Ringo's diagnosis follows his cancelation of a concert this weekend in Prior Lake, Minnesota -- while it was noted he'd fallen ill, the official word was that he didn't have the 'rona. Obviously, he's contracted it since then. 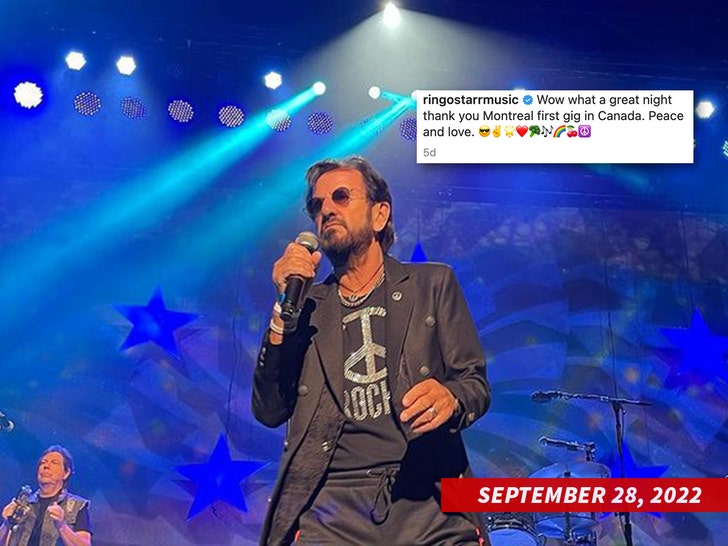 No word on whether it's just Ringo who's got the virus, or if the rest of his bandmates are also sick. He's been rocking out with a rotating crew of musicians, dubbed the All-Starr Band.