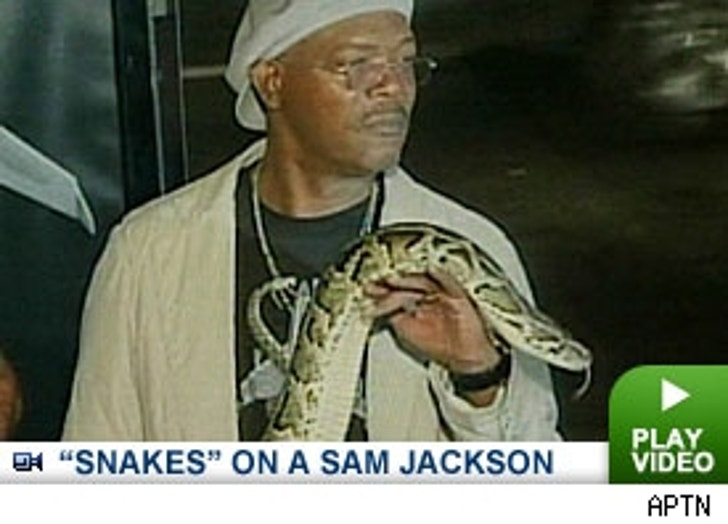 Today is the day, finally, that Samuel L. Jackson's already cult classic "Snakes on a Plane" opens in theaters. Jackson showed he had no shame -- or sympathy for the snakes -- as arrived to the film's Hollywood premiere last night covered from head to toe with snakes.

The actor showed off his shoes, T-shirt and pendant inspired by the film's poster and admitted he had more "Snakes" memorabilia back at home. "I actually have Kangols that have snakes on them, I made those for the cast and crew for a wrap gift, so there is lots of stuff." To drill the fact home that the movie is full of the slithery serpents, in case you hadn't noticed via the title or the six months of relentless hype, Jackson also posed for photos with a 13-foot Burmese python.

Jackson isn't the only one basking in the "Snakes" glow, though, as co-star Julianna Marguiles says she's glad to be noticed for something other than "Dr. Hathaway" on ER. "It is the first time in my career that I have walked through the airport coming here and literally was stopped five times ... Usually it is always 'E.R.' stuff, so now it is all 'Snakes on a Plane' stuff, which I am grateful for."