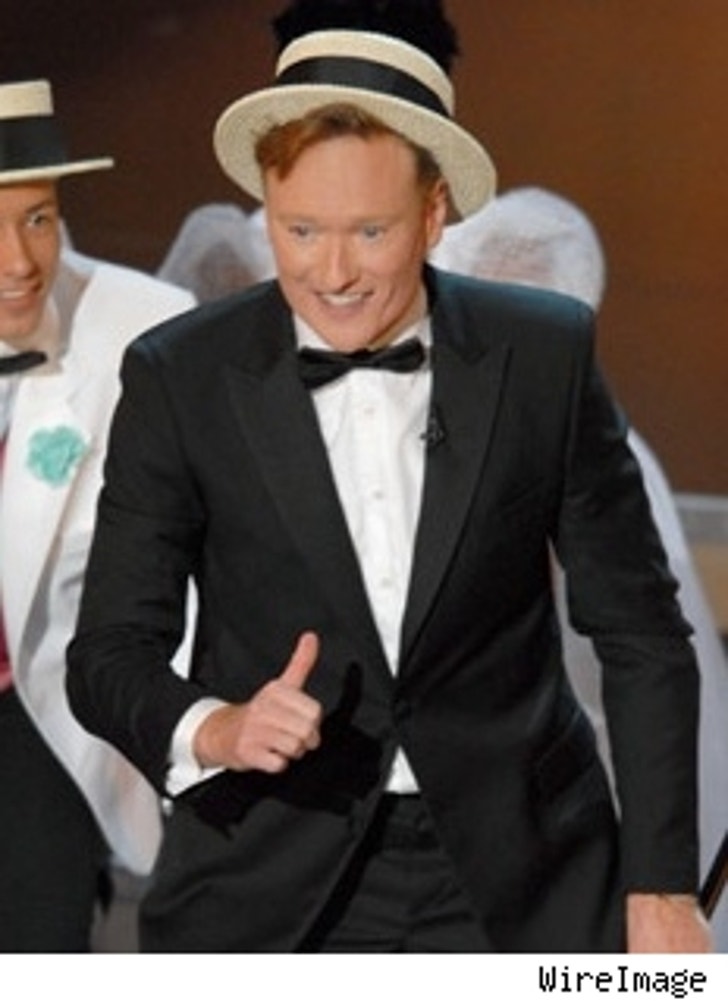 TV's annual festival of self-congratulation passed into history last night for the 58th time, and history will note that Fox's "24" finally got the recognition it deserved, that Conan O'Brien ought to be given the hosting gig for life, and that HBO just can't lose the movie/miniseries category.

"24," of course, took home the big hardware, winning the Emmy for best drama over tough competition that included "The Sopranos" and "Grey's Anatomy," the latter of which was shut out altogether after being favored to win. NBC's "The Office" took home the top prize in the comedy category, and Comedy Central's "The Daily Show" won for the fourth time for best comedy, music, or variety series, and "The Amazing Race" once again beat out "American Idol" for best reality show. And HBO ended up with a tally of 26 total Emmys, good enough to make it the most-feted network for six years in a row; its historical drama "Elizabeth I" won a total of nine Emmys, making it the biggest winner amongst all shows.

Meanwhile, the individual winners were a mix of veteran Emmy favorites and total newcomers. In fact, for some time, it looked as though the acting winners were all going to be from shows that had been cancelled. Whereas Megan Mullaly, Blythe Danner, and Alan Alda all took home supporting trophies for their respective shows, all cancelled, as Danner rather wryly pointed out about "Huff" on Showtime, Kiefer Sutherland finally got a golden girl for playing Jack Bauer, Mariska Hargitay won a rare Emmy for a procedural drama, and Scottish actress Kelly MacDonald won for best supporting actress in a movie or miniseries over a remarkably strong group of nominees, including Oscar winners Cloris Leachman and Ellen Burstyn.

The critical reception to Conan O'Brien as host (as of the morning) was as positive as could be expected for a gig that essentially ends once the opening monologue is over, and the much-ballyhooed tribute to Aaron Spelling went off without a hitch (though Farrah Fawcett seemed dangerously close to having another public meltdown) -- Candy and Tori Spelling were both shown on the telecast, though sitting obviously quite far away from one another. And, perhaps most relieving of all, Barry Manilow managed to get through his performance celebrating a stricken Dick Clark with both hips intact.

And as for the backstage action, several sources note that Tina Fey fell down a flight of stairs, invoking the phrase of the night, "going arse-over-tits," while "The Office's" Rainn Wilson smooched all of his castmates on the lips after their win. Also, the Sheens -- pere et fils -- were seen sharing a smoke, and Jeremy Piven was highly emotional when talking to the press about his first Emmy.