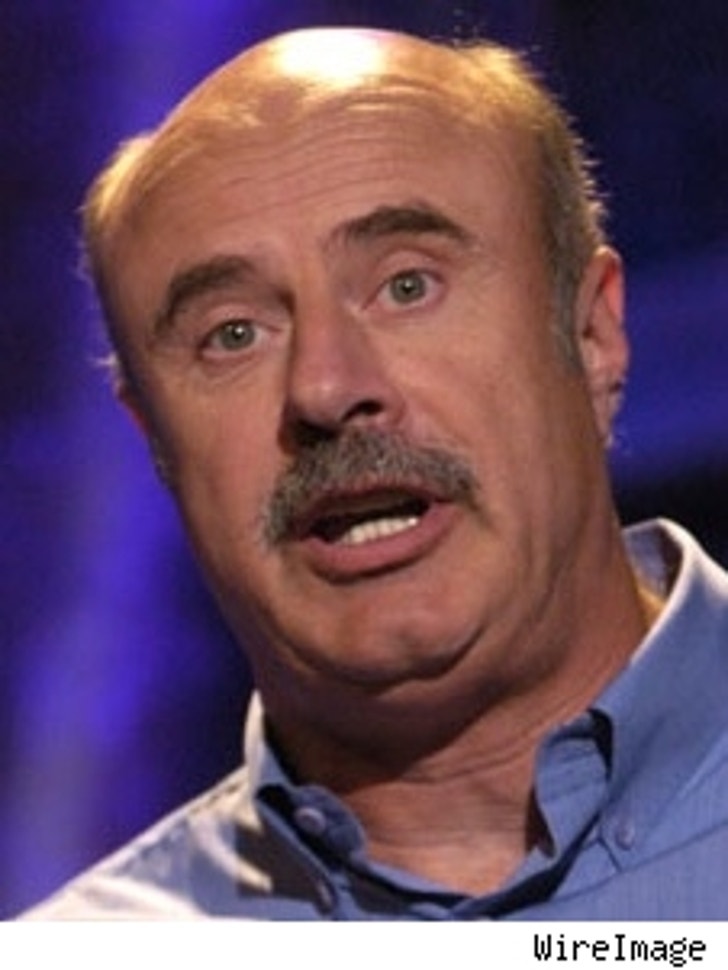 Pop head-shrinker Dr. Phil McGraw will be shelling out to a group of angry dieters. According to lawyers involved in the case yesterday cited by City News Service, Dr. Phil has agreed to pay $10.8 million to settle a class action lawsuit filed by people who didn't like his Shape Up! diet products.

The products, which include supplements and such meal replacements as bars, shakes, and ready-to-drink mixes, are no longer being sold, and the people who bought them accused the defendants, including Dr. Phil, of making false claims about their efficacy. McGraw's name and image appeared on the

products. To palliate the plaintiffs, Dr. Phil and his fellow defendants will be setting up a fund in which the plaintiffs can choose between Nutrilite vitamins or a whopping $12.50 in cash. Of course, in the end, Dr. Phil won't end up paying a cent of his own money, as his insurance will cover whatever he has to pay.

Mel Gibson might be on the road to sobriety, but we're not sure that hanging out in bars is one of the 12 steps. The actor-director was spotted in an Austin, Tex. bar Friday night hanging out until 2:30 a.m., but, according to a witness, he was "only drinking water" and not, as was the case that fateful night in Malibu, flirting with women. Indeed, Mad Mel was in Texas making the rounds for his upcoming Mayan epic, when a Page Six witness caught him at a local joint called the Side Bar, playing pool. Even his rep acknowledged that the description was apt: "Sounds like Mel."

Meanwhile, the kerfuffle over Mel's remarks at a press conference down in Austin where he compared Mayan culture just before its collapse and America today is just scraping the surface of what he actually said, according to MSNBC. "I just wanna draw the parallels," said Gibson. "I just looked at it, and thought, we display that stuff here. I don't wanna be a doomsayer, but the Mayan calendar ends in 2012. So have fun!"

Bobby Brown must not think he's going to get very much from Whitney Houston after their divorce: He's asking reality-show producers for a set of wheels as a form of payment.

The former R&B star was invited to appear on the TV One reality series "I Married A Baller," which chronicles the marriages of sports figures. But the executive producer of the show got a little confused when Bobby made one particular demand. "When he asked for a car, we actually thought he meant for us to book him car service," says Datari Turner in Lloyd Grove's column. "But then I was told that he actually wanted us to buy him a car!"

Of course, for the kind of money that constitutes a standard booking fee, Brown would've gotten a 1995 Nissan Pathfinder or something similarly downmarket, so Brown passed on doing the show. Brown's lawyer and rep says Bobby was just joking about the whole thing.

Clooney: If Ahhnuld Can Do It...

The politically-active George Clooney might not be running for office anytime soon, but he's certainly protesting a bit much in saying that he won't. He shrugged off suggestions from fans that he try for the presidency in 2008, saying, "Believe me, you don't want me in politics," and so on and so forth. Still, appearing at an event at which California Governor Arnold Schwarzenegger signed a bill to help stop genocidal violence in the Darfur region of Sudan, he compared what's happened to him and the Governator since their unfortunate turns in "Batman and Robin": "He's gone on to be governor, and I still think I'm Batman."

Kate Bosworth was spotted by a Lloyd Grove spy at New York eatery Esperanto the other night, but, as befits her current anatomical condition, she wasn't eating -- just smoking cigarettes incessantly. "She was wearing very tight jeans, revealing the fact that her legs were the same size as her pinky," says a spy, who adds that she looked "miserable" ... A "Project Runway" contestant, Jeffrey Sebelia, the one with the throat tattoo, has been accused of violating rules about getting help with sewing, according to the New York Post. "We took the accusations very seriously," says "Runway's" Tim Gunn. This week's episode will tell the real tale, says a rep.