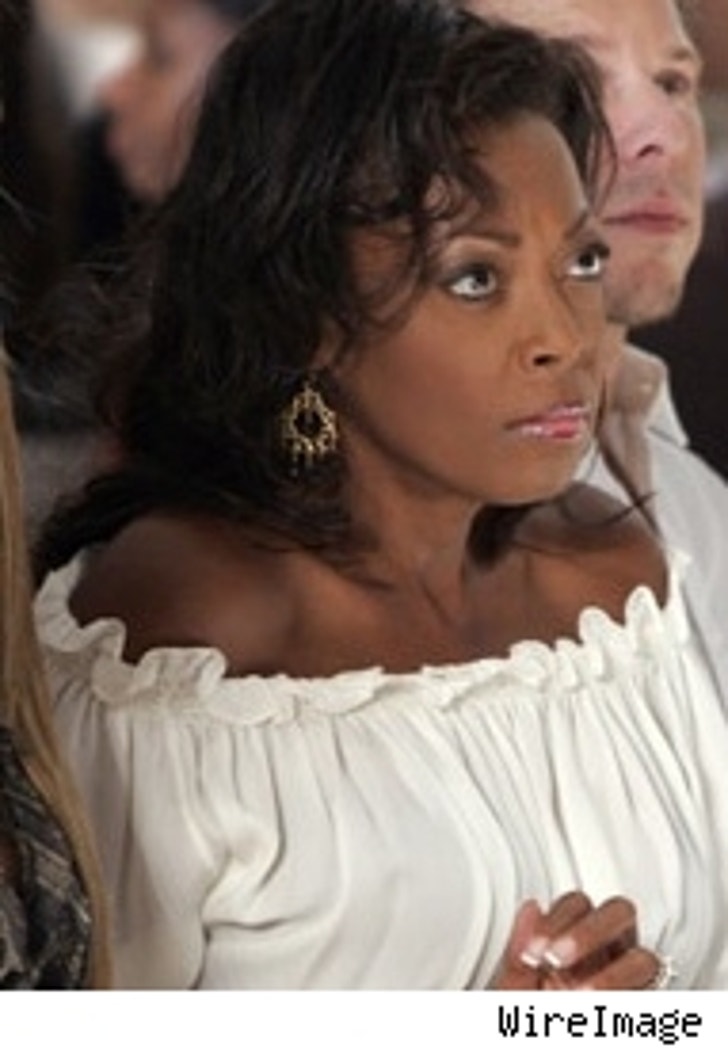 Star Jones is trying desperately to line up her own talk show – so why is she camped out in Miami trying to make it happen?

The deposed ex-"View"-er and her husband Al Reynolds have ditched the Big Apple for the milder climes of Miami, says Page Six, and they've bunkered themselves in a South Beach rental apartment to figure out their next moves. Star is zipping back and forth between Miami and LA as she tries to score a new gabfest, while the 47-year-old Al is apparently penning his autobiography.

Whatever their professional motives, the couple is, as the Post points out, trying to "escape the pressure of New York." And to give their swag-loving image a little burnish, the pair has supposedly sworn off taking freebies, as they did to the hilt in their 2004 wedding.

Little Maddox Jolie-Pitt may really learn how to bend it like Beckham, if his dad Brad has his way. Reports out of the UK this morning say that Pitt has asked soccer superstar David Beckham to give his adopted son, who's five years old, some private one-on-one lessons to give him an extra boost.

Young Maddox is already enrolled at Beckham's Soccer Academy in LA, and, according to the UK's Sky News, has already shown some athletic promise. So his dad wants Beckham – the former captain of the England team who now plays in Madrid but has hinted at moving to the US soon – to help Maddox with his dribbles, headers, and kicks. It makes us wonder what's next -- the Jolie-Pitts hiring President Bush to teach the kids American History? (On second thought, maybe not.)

Publicists of the world, line up your clients. The famously paparazzi-averse George Clooney has a plan to scuttle those pesky photogs: He says he's going to spend every single night for three months with a different famous actress. "You know, Halle Berry one night, Salma Hayek the next, and then walk on the beach holding hands with Leonardo DiCaprio," says Clooney in the November Vanity Fair.

The "Ocean's 13" star's thinking is that people would somehow buy fewer magazines if they weren't sure if they were being pranked or not by that serial jokester Clooney. Perhaps his appearance the other night at a Studio City sushi joint with a "Deal or No Deal" suitcase lass was the debut appearance in the series.

So, granted, it's much more the norm now than the exception, but David Hasselhoff raised eyebrows in the UK last week with some rather, er, odd behavior. When he appeared on the popular morning show "GMTV," according to the London Daily Mail (via The Scoop), he seemed a little out of it, coming out with droopy eyes, slurring his words, and, most egregiously, mispronouncing the name of his "Click" co-star Adam Sandler as "Adam Sanglier."

According to the Mail, the show got hundreds of calls from angry viewers, and his rep says he was just "extremely tired" from the promotional tour for his autobiography "Making Waves." But a source from another show on which The Hoff appeared, added cryptically that Hasselhoff appeared to be "using some pretty odd-scented aftershave."

Meanwhile, Hasselhoff revealed to students at Trinity College in Dublin that his Camaro in "Knight Rider" – aka K.I.T.T., the Knight Industries Two Thousand – was, yep, gay. "We have some fairly X-rated outtakes on 'Knight Rider.' K.I.T.T. was constantly asking: 'Do you want me to take you home Michael?'"

Lloyd Grove reports this morning that, after buying $38 worth of mags, mints, and beef jerky at JFK the other day for her and her sister, Mary-Kate Olsen demanded that Ashley give her a massage "during the flight." But Ashley complied immediately – just as they headed up to the United lounge, she had both hands wrapped around her sister's neck ... Former "90210" starlet Jennie Garth and her actor husband Peter Facinelli welcomed their third child over the weekend, reports People, a girl named Fiona Eve Facinelli. She joins sister Luca Bella, 9, and Lola Ray, 3 ... Shooting begins this week on "The Bourne Ultimatum," the third installment of the popular action franchise starring Matt Damon, but – oops – there's no bad guy yet. The Hollywood Reporter says that "Science of Sleep" star Gael Garcia Bernal has been offered the part.