Travis Barker was challenged to a fight by a photog just one hour before yesterday's nuclear showdown -- and TMZ has now obtained video of the confrontation that ignited the whole thing.

The video shows an antagonizing cameraman (not TMZ) seriously getting into it with Travis, inciting him by saying, "Whatcha gonna do?" as Barker walked with his children into Marmalade Cafe at the Commons.

Travis is seen swinging at the camera and yelling "I'll kick the s**t outta you bro ... if I didn't have my little girl in my hands ... give me an hour and I'll meet you." The photog said he'd be waiting.

As we previously reported, neither of the guys Travis and Co. fought with on the way out are the photog in this video. 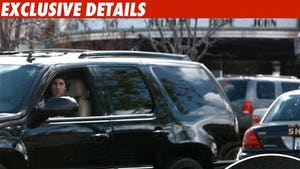