Halle Berry's nanny -- who Gabriel Aubry allegedly pushed into a door while she was holding his daughter Nahla -- just got shut down in court -- the judge rejected her request for a restraining order.

Alliance Kamdem claimed she feared retaliation by Aubry, but the judge called her petition "insufficient and speculative."

Kamdem claims during a recent trip to Spain where Halle was shooting a movie, Gabriel "would walk over and violently grab/take Nahla away from me."

She also said Gabriel didn't like her from the moment she began her duties as a nanny last June. She claims Gabriel said, "You are a spy," and "Nahla doesn't like you, she doesn't want you here."

The judge said Kamdem's issues should be resolved in family court.

TMZ broke the story ... Gabriel is currently being investigated for child endangerment and battery -- after allegedly pushing Kamdem into a door while she held Nahla in her arms.

Kamdem filed a police report after the incident, claiming Gabriel had injured her. She has since quit the nanny position. 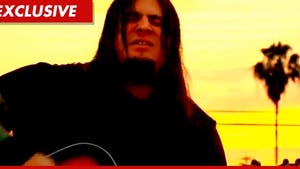