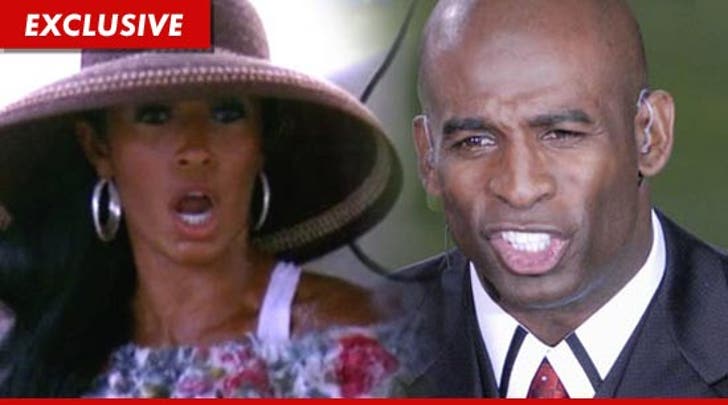 Deion Sanders "orchestrated" a violent attack on his wife ... designed to physically force her out of his Texas mansion ... this according to a new lawsuit filed by Pilar Sanders.

In a fast and furious legal response to the altercation at the home this week, Pilar filed suit against Deion and a woman named Laura Jones, the woman accused of carrying out the attack.

According to the documents, Deion summoned Laura -- his "fake aunt" -- to help him physically remove Pilar from the home on Feb. 6 so Deion could change the locks and bar her from returning.

Pilar claims Jones is legally banned from entering the home ... but she entered the place anyway ... so Pilar says she demanded that the woman leave immediately. Instead, Pilar claims, the woman "squared off and took a swing at [Pilar] hitting her in the eye."

Pilar says Laura "continued to hit, slap, punch, choke, push and kick" her ... causing various injuries. Pilar says she was so scared, she grabbed a KITCHEN KNIFE and prepared to defend herself until cops arrived.

Now, Pilar wants a judge to issue a restraining order against the woman ... and she wants Deion to fork over a check for the mental and physical pain.

After the incident, Deion claimed Laura was only at the home to fix his phone system and said Pilar's account is completely untrue.