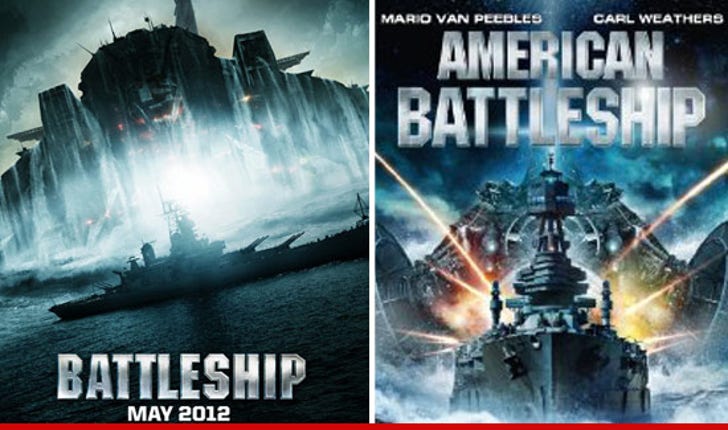 Universal Studios claims its new big budget movie "Battleship" is in jeopardy -- all thanks to a low budget straight-to-DVD knockoff that's coming out ... and now, it's suing.

Universal filed the lawsuit against The Asylum -- a production company that makes low-budget straight-to-DVD "mockbusters" with similar titles to their big budget inspirations ... i.e. "Titanic 2," "The Terminators," and "Transmorphers." Just look at its IMDb page.

Now, according to the lawsuit, Asylum's up to no good once again -- releasing a DVD called "American Battleship" on May 22nd ... just 4 days after the big budget "Battleship" is set for theatrical release in the U.S.

According to the lawsuit, Universal spent $100 million producing its film ... and $30 million promoting it in the U.S. alone -- and Asylum's trying to piggy back on its hard work.

To prove its point, Universal points out the laundry list of ways "American Battleship" is a rip-off -- including the plot ... and the hilariously similar movie posters (above).

According to the lawsuit, Universal is the exclusive licensee of the film rights to the classic naval combat board game -- and Asylum's stepping all over its business. (Universal also calls its movie "highly anticipated," but wishing doesn't make it so.)

Universal is suing for unspecified damages -- i.e. many, many millions.