Charlie Sheen looked like the same ol' Charlie Sheen as he left the Ritz-Carlton in NYC Tuesday ... and his hotel bill does not support a report that Charlie threw a raging party in his room.

According to the hotel bill -- obtained by TMZ -- Charlie (who checked in under the alias Mr. Chuck Clark) ate breakfast, lunch and dinner in the hotel -- most of the time in his room. FYI, usually people high on coke don't eat 3 meals a day.

As for alcohol ... there's no evidence that he ordered booze on June 22, 23, 24 or 25. On the 26th, Charlie ordered 5 different cocktails -- which makes it seem like it was not all for him -- plus a bottle of Krug wine. By the way, it's highly unlikely hookers drink Macallan 12 scotch or Remy Martin XO.

There are also charges for laundry and in-house pressing. Makes sense, because Charlie was in NYC for interviews about his upcoming show, "Anger Management."

Charlie tells TMZ ... on the 26th he had dinner in his room with "friends" and there were no drugs. As for drinking, he said, "Everybody drinks." 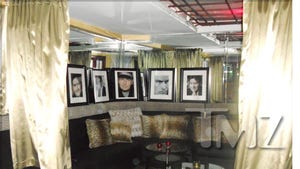