A former "America's Got Talent" contestant is suing the L.A. hotel where his wife was murdered back in 2010 ... claiming the hotel's head of security snapped photos of his wife's half-naked lifeless body and then showed them off at the hotel bar ... just for kicks.

The man behind the lawsuit is Joe Finley -- who was staying at the Millennium Biltmore Hotel in L.A. with his wife the night before he was scheduled to audition for "AGT." But before the audition, Joe's wife's body was discovered at the bottom of a hotel staircase, wearing only pants ... naked from the waist up.

Joe believes his wife was killed by vagrants who entered through an unlocked door and attacked his wife while she was getting ice from the hotel ice machine.

But in new legal docs just filed in L.A. County Superior Court, Joe -- along with the couple's children -- claims hotel personnel acted in a disgusting manner in the moments following the tragedy.

Joe claims the Biltmore's Head of Security, Arthur Smith, "took a gruesome death picture of [Laura Finley] and disseminated that photo to the general public."

Joe claims Smith even flashed the topless death pic at the hotel bar for "no investigative purposes, but for macabre effect."

Joe filed the new allegations as part of his wrongful death lawsuit against the Biltmore. He's now seeking additional unspecified damages for emotional distress and invasion of privacy. 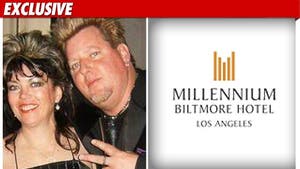 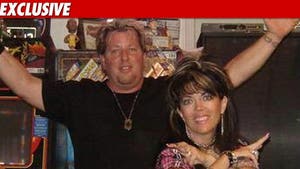