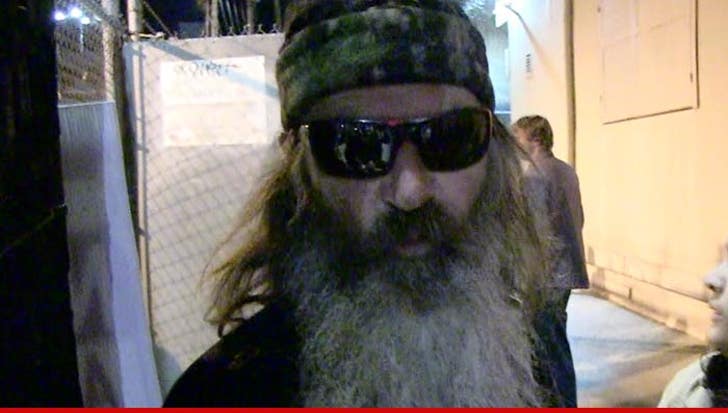 4:55 PM PT -- A&E just dropped the hammer on Phil ... putting him on indefinite hiatus. The network says its disappointed by his anti-gay comments -- which are his own personal beliefs and not reflective of "Duck Dynasty" or the network. A&E says it supports the LGBT community.

8:15 AM PT -- Phil's trying to backpedal by releasing a statement through A&E in which he says, "I would never treat anyone with disrespect just because they are different from me."

But he's still doing some thumping ... adding that the Bible teaches "women and men are meant to be together."

"Duck Dynasty" patriarch Phil Robertson is blasting gays ... and not in the usual Bible-thumping way -- instead he's going off about the benefits of vagina as compared to a man's a**hole.

Robertson went on a rant about religion, homosexuality, and a bunch of other things in an interview with GQ -- saying, "It seems like to me, a vagina -- as a man -- would be more desirable than a man's anus. That's just me."

Phil continued his verbal attack by claiming society's become too accepting of sin. He says, "Start with homosexual behavior and just morph out from there. Bestiality, sleeping around with this woman and that woman and those men ... they won't inherit the kingdom of God. It's not right."

As for whether his comments will affect "Duck Dynasty" ratings -- Phil doesn't seem concerned about the show's long term future, saying ... "It's a TV show. This thing ain't gonna last forever. No way."