A former NFL star -- and Super Bowl champ -- has been FIRED from his job as a college football coach after BODY SLAMMING another man in the gym at Bowie State University ... TMZ Sports has learned.

We broke the story ... BSU officials were investigating an October 30th incident involving former New Orleans Saints defensive end Charles Grant ... who was a volunteer linebackers coach at the school. Grant, 6'3" and 285 lbs, won a Super Bowl with the Saints in 2009.

Sources tell us the victim is a student-athlete at the University -- though officials will not confirm his identity.

We also know the incident is now a police matter -- with Bowie State University police conducting an investigation.

We spoke to a rep for the PD who tells us, "We've talked to the victim. We've interviewed witnesses. We have had several conversations with Mr. Grant over the phone, but nothing formal."

So far, no criminal charges have been filed against Grant.

Multiple attempts to reach Grant for comment have been unsuccessful. 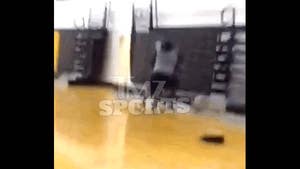