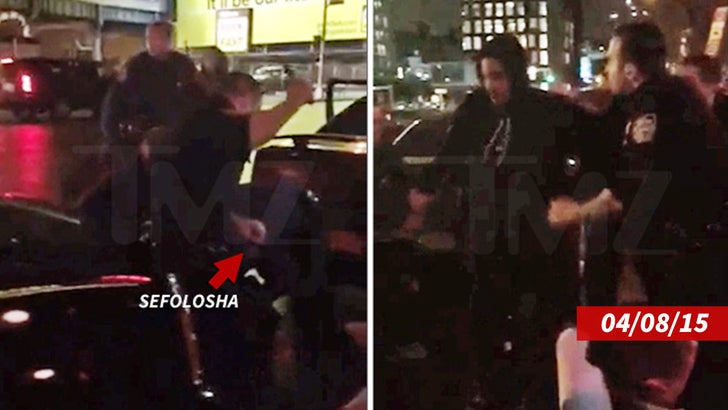 Atlanta Hawks star Thabo Sefolosha appeared to suffer a severe blow from an NYPD officer's nightstick during his arrest Wednesday night ... based on this new video of the violent take down.

TMZ Sports just obtained this new angle of Sefolosha's arrest, shot by a witness outside 1Oak Nightclub in NYC ... moments after Pacers Chris Copeland was stabbed.

In this video you can clearly see Sefolosha being tugged in different directions by 6 officers. Additionally ... you can see one of the officers take a big swing with his baton, and it sounds like he makes contact with something.

As we've reported ... Sefolosha broke his fibula during the scuffle with cops, and based on this video it's possible it could've been caused by the officer's baton.

In their report, police said Thabo was aggressively charging at one of the officers before they got physical with him. That's not evident from either video we've obtained ... since they start after the scuffle began.

Thabo is out for the remainder of the season ... due to the injury. He was arrested for obstruction, but plans to fight the charges.