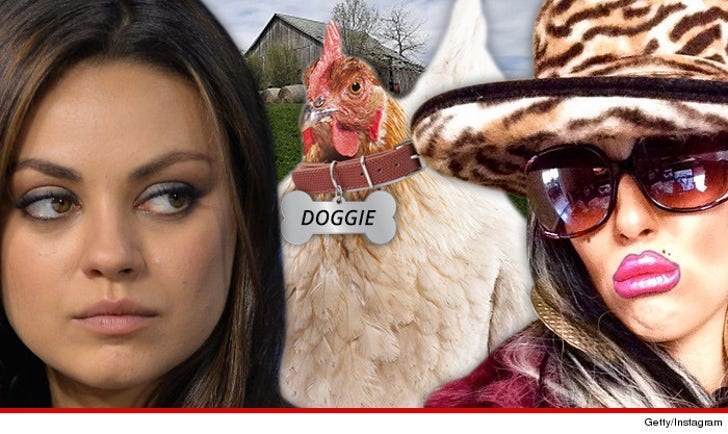 Mila Kunis ﻿has nice breasts ... problem is, she stole them along with other chicken parts, this according to a new lawsuit filed by a woman who claims to have been her best Ukrainian friend.

Kristina Karo claims 25 years ago she was in first grade with Mila in the Ukraine and they were inseparable. But Kristina says Mila had chicken envy -- specifically a chicken which answered to the name Doggie. Kristina alleges in her lawsuit she loved Doggie like a dog, and so did Mila, who would come to her house and play with the little clucker.

But one day Doggie disappeared, and Kristina says Mila confessed that she stole it, saying, "Kristina, you can have any other chicken as a pet, you have a whole chicken farm."

Kristina says in her lawsuit she became an emotional wreck and went into therapy.

Years passed, Mila moved to L.A. and became a big star. Kristina also eventually moved to L.A. to pursue a singing career. But the proximity brought back all the bad memories, and Kristina says the visions of Doggie being stolen by her former best friend threw her right back into therapy.

Kristina now needs shrink money, and a little extra for all the emotional distress ... in all, $5k.

And Kristina says Mila's conduct has prevented her from pursuing the American dream.

Life, liberty and the pursuit of a happy meal.