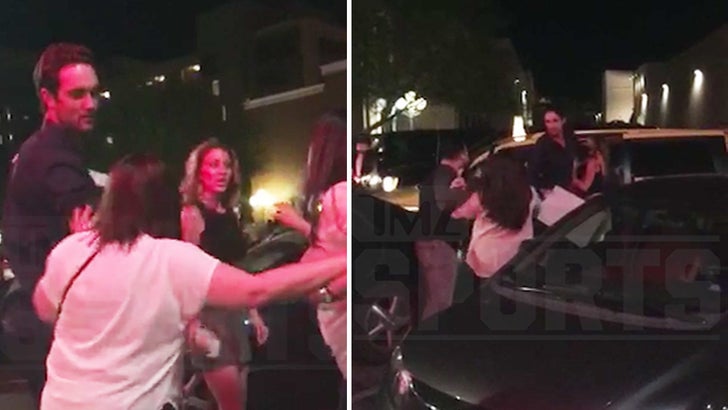 2:23 PM PT -- We spoke with a rep for the Scottsdale PD who tells us they have reviewed the video and contacted the off-duty officers who were at the scene.

We're told the cop on scene felt the situation "did not rise to the level of a criminal violation" so no one was arrested.

"There was no crime reported and no victims came forward."

You're about to watch a video of a man protecting his entire career ... when Broncos QB Brock Osweiler is attacked by a guy outside of a pizza place -- but smartly REFUSES to fight back.

It all went down in front of Joe's Pizza in Scottsdale, AZ around 2 AM early Saturday morning -- when Brock and his crew showed up for a late night pie after watching his friend Kelley James perform at the nearby W Hotel.

During the pizza run, we're told Brock was heckled by another group -- and things got heated. One woman tries to confront Brock's wife and Brock uses a stiff arm to push her away. Brock then tries to gather his crew to get into a waiting car to leave the situation.

But one of the men in the other party didn't like that Brock made physical contact with his lady -- and shoved Brock in the back hard ... sending the QB flying toward the waiting car.

Instead of turning and fighting the guy, Osweiler -- who's on the verge of signing the biggest contract of his life -- held his crew back and ordered everyone into the car.

Cops were on scene and helped break everything up ... but the bottom line, Brock WALKED AWAY without an injury or an arrest.

Oh, and one last thing ... during the entire fracas, he NEVER fumbled the pizza box.