Holly Holm says she's pretty damn sure she's clean -- because she's been tested for PEDs 14 TIMES in 2016 ... one more than Conor McGregor.

Holm was addressing the media before the big fight this weekend with Valentina Shevchenko -- when she said she's been more than any other fight in the UFC.

"Friday was number 14 just within the last year."

In video posted by MMAFighting.com (around 36:25), Holm says officials usually collect both blood and urine samples for testing.

With Jon Jones and Brock Lesnar dominating the news for allegedly flunking PED tests -- fighters need to be more careful than ever about what they put into their system.

One more thing ... Holm was also asked if she regretted taking a fight with Miesha Tate before a big money rematch with Ronda Rousey.

"And that was my point being. I told them, I said, ‘I will wait for the rematch with Ronda as long as we can promise that it will be by a certain time.'" 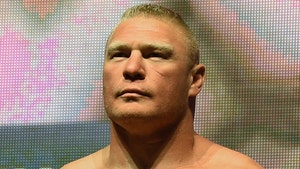