Lonzo Ball says he's incredibly thankful to Jay-Z for ordering 3 pairs of his ZO2 kicks -- but reminds the mogul the shoes ain't coming for another 3 months!

We got Lonzo out in Bev Hills over the weekend -- after dropping some cash at Louis Vuitton -- and asked about Jay publicly and privately throwing his support behind the Big Baller Brand.

Lonzo says he hasn't met with Jay and doesn't know too much about the business side of the shoe line -- "I just play basketball man. I don't handle that."

As for Jay's one complaint ... that he hasn't received any of the shoes yet -- Lonzo reminded Hov that they aren't scheduled to ship until November.

As we previously reported, Jay appeared on "Rap Radar" podcast on Tidal last week and told Elliott Wilson and B.Dot that he's backing the BBB brand because it's important for him to help black owned businesses. 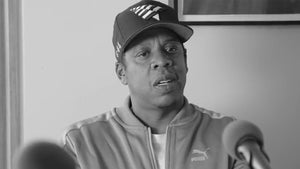