Kathy Griffin's photo of a fake, bloody Trump head has would-be buyers chomping at the bit to have it hanging in their living rooms ... but the photog has his price, and it's mighty steep.

Sources close to Tyler Shields -- who took the shot of Kathy holding the fake, bloody head resembling President Trump -- tell us he's already gotten over 1,000 offers from folks interested in buying a print of his controversial art piece ... many reaching 6 figures.

As for Kathy -- who took tremendous heat for the stunt -- sources say Tyler doesn't need her to sign off on any potential sale since he owns the rights to the pic. 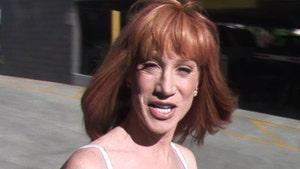