Sergey Kovalev says he's "disappointed" Andre Ward is retiring from boxing because "I don't have opportunity to kick his ass again."

The Krusher joked to TMZ Sports that he predicted he would end Ward's career before their second fight back in June ... and now, "It's true!"

Of course, Kovalev and Ward fought twice over the past year -- with Ward officially winning both matches.

But Kovalev says the judges got it wrong ... he clearly won the first fight and was looking forward to fight #3 to settle what he believes is a 1-1 tie.

That said, Sergey definitely throws some shade at Ward as he sends the boxer off into the sunset -- explaining why the sport will be better off without Son of God.

As for Kovalev, he's gearing up to fight Vyacheslav Shabranskyy in November. 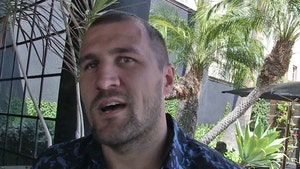