Drake helped lay his longtime friend, Anthony "Fif" Soares, to rest this weekend ... this after the guy was brutally gunned down in Toronto.

Drake attended Fif's funeral service Saturday at the Ogden Funeral Home chapel in Scarborough, Ontario ... and later traveled to the Duffin Meadows Cemetery where he served as one of the pallbearers for the casket.

Eyewitnesses tell us Drake did not speak at the procession, and mostly kept to himself. You can tell from the video he's in deep mourning over Soares' death ... who was just killed a couple weeks ago.

As we reported ... Soares was gunned down in his apartment lobby by 2 unidentified men. Police released surveillance video of the murder ... and it graphically shows him being shot.

Police are still investigating the crime ... they had no suspects as of last week. 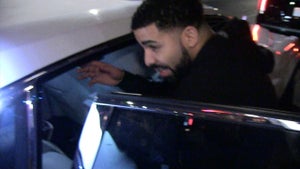