Cam Newton owes a female reporter a big apology -- for disrespecting her during a news conference because she's a woman ... and the reporter is justifiably upset.

The Carolina Panthers QB was taking questions from the media when Jourdan Rodrigue asked how he felt about WR Devin Funchess being more physical when running his routes.

Newton laughed and then said, "It's funny to hear a female talk about routes."

Jourdan -- who covers the Panthers for the Charlotte Observer -- replied on Twitter, "I don't think it's 'funny' to be a female and talk about routes. I think it's my job."

When asked if anyone spoke with Cam after the incident she said, "I spoke with him after and it was worse."

"I chose not to share, because I have an actual job to do today and one he will not keep me from." 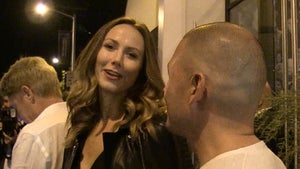 Stacy Keibler -- Calls Out Cam Newton Over Lawsuit ... 'DO THE RIGHT THING' (VIDEO)