Logan Paul is making a full mea culpa for posting a vlog showing a dead body he discovered in Japan ... saying he only intended to raise awareness about suicide.

The famous YouTuber posted the original 15 minute video Sunday showing him and some friends venturing through a forest at the base of Japan's Mount Fuji -- otherwise known as "Suicide Forest" for the high number of self-inflicted deaths that happen there.

In the video -- which is incredibly graphic -- Logan and his crew stumble upon a dead body hanging from a tree. He comes up close to the body and zooms in while police are called.

As you might imagine, Logan caught a huge amount of backlash online -- and he took down the video soon after. He also issued a lengthy apology Monday.

Sounds like he's sorry -- but we gotta say ... this one seems like it should've been a no-brainer from the get. 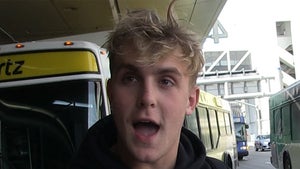