Conor McGregor isn't just a disgrace to his sport, "HE'S A DISGRACE TO MANKIND" ... so says Tyron Woodley.

The UFC welterweight champ says he's shaking his damn head over Conor's violent attack on a UFC bus -- and questions, "How do you get away with this?!"

"You need to get your life together," Tyron said on "The Hollywood Beatdown" on the TMZ Sports YouTube channel.

"You're making us look bad."

Tyron also tells us if he thinks Conor will ever fight in the UFC again.

There's more ... Tyron also reveals some bombshells about his upcoming RAP ALBUM -- and daps up Ronda Rousey for her accomplishments in the WWE. 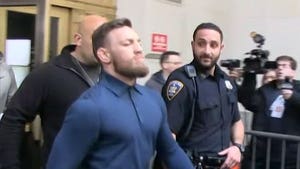