Roy Moore played right into Sacha Baron Cohen's hands as the comedian pulled off a prank that seemed to label Moore a pedophile ... and the whole mess could be headed for court.

The skit aired on Sunday night's episode of "Who Is America?" -- Moore was interviewed by Cohen, who was disguised as an ex-Israeli intelligence officer. Cohen's character told Moore Israel had developed technology to detect an enzyme that pedophiles secrete.

Watch Moore's reaction when Cohen busts out the device -- which, of course, alarmed like crazy around Moore. It's pretty clear the failed Senate-candidate thinks something is up, but still he sits through the bit.

It's really odd ... especially because Moore was so beset by multiple allegations he'd sexually assaulted minors many years ago. He's never been charged with a crime.

Moore said even before it aired, he would consider suing Showtime if it "airs a defamatory attack on my character." He also dismissed Cohen's comedy as "trickery, deception, and dishonesty." 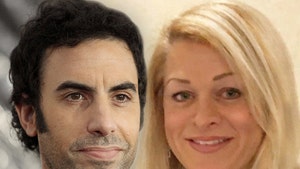 Sacha Baron Cohen Sends 'Who Is America?' Art Dealer a Letter and Gift