"Why would you wanna watch someone play a video game?!"

Ninja's heard that question a lot recently ... and the eSports legend says his answer to his hating-ass haters is simple -- 'cause he's really freakin' good at it.

In fact ... the Fortnite prodigy says it's actually similar to why people watch NFL, MLB or NHL players!!!

"There's so many people like, 'Well, why do you watch people play video games when you can go play video games yourself?' And, it's like, can you do that? Can you compete at that high of level and be entertaining?"

"You watch the NFL and things like that because you want to watch people do things that you know you can't. It's the same thing with gaming and streaming."

Ninja made the statements Monday night on 'The Tonight Show' to Jimmy Fallon ... and it's pretty clear he's growing tired of people questioning his insane online popularity.

"Dude, it's so funny, man. Why would you want to watch the best of the best play football, soccer, hockey??"

It's a great point ... and Ninja's clearly proving it every day -- the guy has 12.5 MILLION followers on Twitch, AND over 20 MILLION subscribers on YouTube!!!

BTW ... if you haven't seen it -- Ninja also gave Jimmy a demonstration of how to do his victory dance!!! 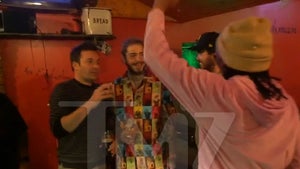