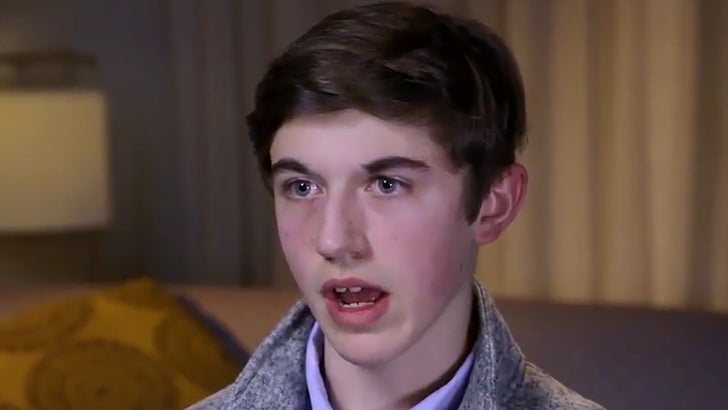 The MAGA hat-wearing high schooler who drew the ire of many for standing and smirking at Vietnam-era vet Nathan Phillips during a protest says he meant no disrespect ... but it doesn't seem like he's planning on saying sorry either.

Nick Sandmann is speaking in public for the first time since the incident went down in D.C. Friday, telling 'Today' show co-host Savannah Guthrie he feels he had every right to do what he did.

Sandmann also tells Guthrie, who asks him if he sees any fault in his actions, he respects Phillips and hopes he can talk to him ... and wishes he could have avoided the situation.

As you know, Sandmann and his classmates from Covington Catholic HS in Kentucky were seen on video surrounding Phillips -- a Native American participating in the Indigenous People's March -- laughing and chanting at him while he was singing and drumming.

Sandmann particularly stood out as he stood face-to-face with Phillips, steadfast with a smirk.

Many believe the vid shows the students harassing Phillips, but others came to the defense of Sandmann and the students later, claiming a longer video shows Phillips was the instigator of the confrontation. Sandmann backed this in a full written statement, claiming Phillips singled him out and he simply stood his ground.

Sandmann's full interview will air on Wednesday morning on "Today."