Halsey may have put her ex, G-Eazy, on national blast Saturday night on 'SNL.'

She performed "Without Me" during the show and the wall behind her revealed huge letters that said, "Ashley, I cheated." Halsey's guv name is Ashley.

It could be random, but she had to know people would assume she's referring to her ex, with whom she had a turbulent relationship during the year they were together.

There were lots of rumors she broke up with him over cheating, but she never opened up, once saying, "The biggest lesson I learned was to make art, not headlines ... because it can become quite easy, in the social media generation, to go from being a musician to becoming a personality."

That said, it seems she's playing to the social media generation, because people scrambled to twitter to decipher, and most say it's about cheating. 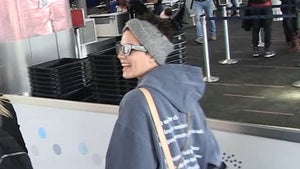 Halsey Thinks Kyle Kuzma Will Save Lakers While LeBron Is Gone