Jaylon Ferguson -- the projected 1st-round pick who was disinvited and then reinvited to the NFL Combine -- ain't sweating the drama one bit ... telling TMZ Sports, it's only gonna HELP his draft stock.

Here's the backstory ... the 23-year-old Louisiana Tech pass rusher was reportedly arrested for fighting at a McDonald's during his freshman year. He was later convicted of simple battery.

Per NFL rules ... if a player is found guilty of a misdemeanor or a felony involving violence -- their Combine invite will be pulled.

Since Ferguson went on to become the NCAA's all-time career sack leader (with 45) -- NFL teams are VERY interested in him. Which makes the Combine drama even more interesting.

Ferguson's story has blown up on social media -- where people are arguing Ferguson deserves an opportunity to attend the Combine if only to explain his side of the story to GMs ... and on Friday, the NFL caved.

Jaylon still won't be able to work out at the annual event ... but, he's at least now able to go and interview with teams -- and he says he's JACKED for the opportunity.

But, Ferguson also says this whole drama is only going to HELP him get picked higher in April's NFL draft.

"Now that I got my name out there more, more people know me. More people heard of me."

As for the fighting incident ... Jaylon says it's a non-issue, telling us, "I'm not even the same person." 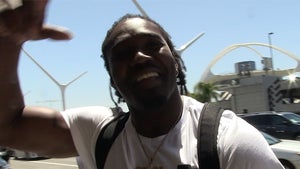 Cowboys' Bo Scarbrough to Ezekiel Elliott: Take Me Under Your Wing!