Tyron Woodley and Max Holloway have been asked every MMA question in the book during their prolific careers ... but what are the 3 WORST questions they hate the most during fight week?!

The Chosen One and the conductor of the Blessed Express are pulling no punches on this week's episode of "The Hollywood Beatdown" ... where Max was promoting his UFC 240 fight against Frankie Edgar.

Of course, the fight will be Max's first since his loss to Dustin Poirier back in April -- but Max says he's ready to prove he's back and more dangerous than ever.

Besides revealing the 3 Q's he hates more than anything ... Holloway also shouted out his pal, Justin Bieber, and said the guy is serious about taking an MMA fight, he'd LOVE the opportunity to train him up!

Make sure to check out "The Hollywood Beatdown" every week on the TMZ Sports' YouTube channel. 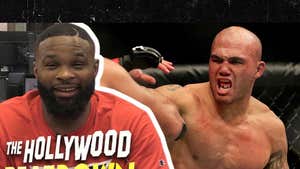 UFC's Tyron Woodley Gunning for Fight In August, But There's a Catch