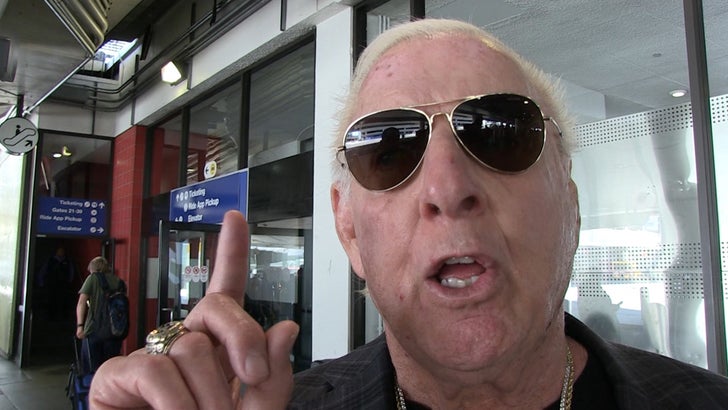 Ric Flair believes the WWE is ripping him off -- using the phrase The Man without his permission ... and now he's threatening legal action.

Flair says he's been referring to himself as The Man since 1981 -- and even holds the trademark for his famous catchphrase, "To be the man, you gotta beat the man."

The problem ... one of WWE's biggest stars -- Becky Lynch -- has been referring to herself as The Man over the past year and the nickname has become a huge hit with fans.

Ric tells TMZ Sports ... he was trying to work out an amicable, private agreement with WWE where they would pay him to allow Becky to continue to use the name, but WWE blew him off.

In fact, Ric says he escalated the situation to WWE executive, Triple H ... but they still couldn't reach an agreement. So, on August 26, he filed an application with the U.S. Patent and Trademark Office to own the term, The Man, specifically as it relates to pro wrestling.

Now, Ric says the WWE is pissed at him for making the move -- and it's caused a rift between himself and his daughter Charlotte Flair, a current WWE superstar herself.

Flair says he has NO beef with Becky Lynch -- and supports the WWE's women's division -- but business is business and he wants what he believes he's rightfully owed.

Ric says if the USPTO grants him the trademark, he'll happily let Becky use it ... as long as WWE pays him -- because "I want it to take care of my family."

And, if he doesn't get paid, Ric says he's willing to explore his legal options to force WWE's hand.

During our conversation, Ric emotionally explains why the most important thing to him is making sure the people he loves -- especially his wife, Wendy Barlow -- are financially secure after he dies ... and that's why he's willing to fight for The Man.

"When I almost died two years ago, one person stayed by me [Wendy]. The whole time -- 31 days in the ICU, 12 days while I was dying on a respirator -- and I'm gonna take care of her, and her family, and my family that has taken care of me no matter what."

Flair adds ... "I don't care what the WWE thinks of me personally, I know they love me, but obviously they've lost respect for me."