Baker Mayfield can finally relax ... Odell Beckham's core muscle injury that kicked off a rift between the Browns QB and the team's training staff has finally been fixed!!!

Baker later had to apologize for those statements, saying, "My intentions were not to throw our medical staff under the bus. No, I don’t know all the facts about Odell’s injury."

"It was emotionally answered because I can sense his frustration and I care about my team and putting us in the best position to win."

But, good news for all involved ... the Cleveland Browns said in a statement Tuesday the issue has been resolved once and for all!

"The surgery was performed by Dr. Bill Meyers in Philadelphia, and a full recovery is expected."

It's unclear how much offseason work OBJ will miss because of the injury ... but everyone in Cleveland is hoping it'll help him improve on a year in which he only scored 4 TDs in 16 games. 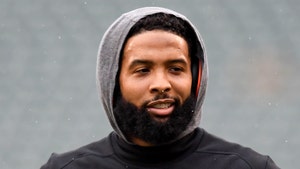