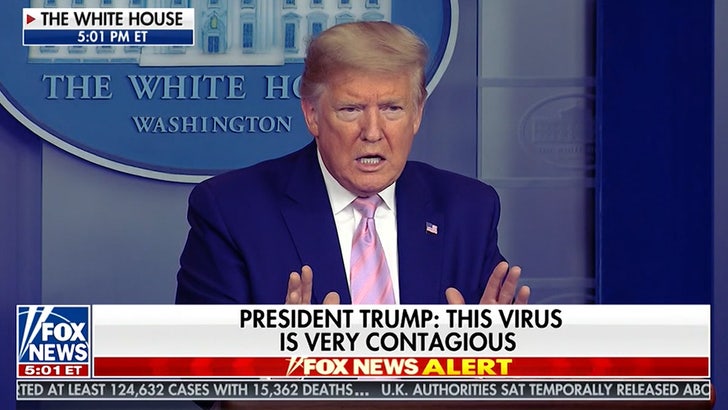 Forget politics for a minute ... Donald Trump is demanding, of all things, gratitude from New York Governor Andrew Cuomo, despite the fact New York's health care system is about to break without these phantom tests, ventilators and PPE's the President constantly claims are rolling out.

Trump was true to form as he MC'd his daily coronavirus briefing, boasting about the federal response ... something in sharp, sharp contrast to the thousands of doctors and nurses who are now drafting their wills because there's nothing to adequately protect them from the disease.

Trump went in on Cuomo, saying he's given him everything imaginable ... maybe he didn't hear about the broken ventilators, the ridiculous competitive bidding among states for lifesaving equipment, the lack of masks, the lack of tests, and on and on.

Trump said Cuomo should be more like CA Gov Gavin Newsom. Here's the thing ... Newsom's a smart guy, and he, like every other leader at this point, knows Trump's enormous ego needs heavy stroking ... or else. Remember, he told Pence not to even call the governors of Washington State and Michigan because they supposedly lacked gratitude.

Here's what clearly escapes Trump. We want leaders who speak up, leaders who raise their voices when the doctors and nurses in their states are getting infected and dying. We need leaders who will stand up to a federal government that STILL will not recommend that EVERY state impose a stay-at-home order ... which is the most absurd thing in this whole messed up situation.

Trump likes polls, so check ours out today. People think Cuomo is a better leader than Trump by a margin that exceeds 2 to 1.