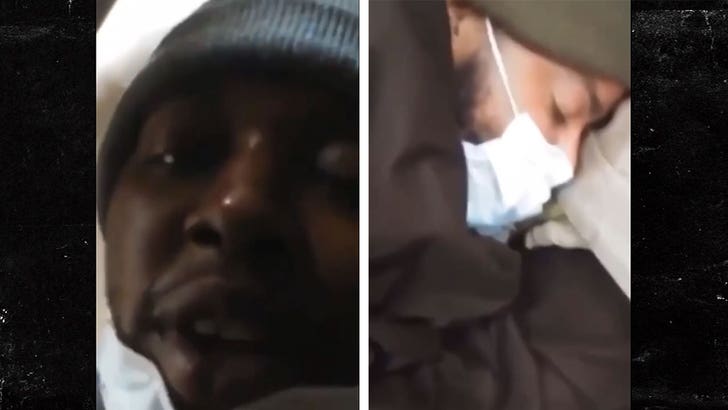 8:15 AM PT -- A rep for the Bureau of Prisons tell us that they identified the men in the video, and neither was symptomatic of COVID-19. We're told the video was recorded at Elkton Federal Correction Institution in Ohio and is still under investigation.

There's a federal prison preparing for mass coronavirus casualties ... at least according to an inmate who risked posting video from his cell to expose how the virus is wreaking havoc on in the inside.

The inmate never identifies himself, but said he was using a contraband burner phone to go on social media ... just feet away from his cellmate who he claims has COVID-19 and is struggling to breathe.

He says inmates in the unnamed prison are getting infected by dozens, and some have already died -- he claims to have witnessed guards taking victims out on stretchers, and that the prison had a tent set up to line up the bodies.

The inmate was wearing a mask, and so was his cellmate who allegedly has COVID-19 ... and definitely seems to be very ill. The cellmate told him not to call guards for help because they won't do a damn thing.

The guy with the phone says he's set to get out in a year, but he was still willing to risk going live and showing his face because the situation was too dire not to expose it. As for where he was -- he makes a reference to the feds and to Cuomo ... so, he could be at a federal prison in NY state.

Then again, he could be talking about Chris Cuomo, because he also referenced CNN.

The guy knows his current events though, because he mentions "compassionate release" ... when judges sign off on early releases for prisoners who are non-violent, aging, or in an at-risk group.

Remember, that's how Tekashi 6ix9ine got out early.