We've all heard that a Chinese bat got the coronavirus ball rolling, but that doesn't mean our domestic bats are a problem -- and if anything, we're a bigger threat to them.

U.S. federal wildlife workers have been talking amongst themselves about a so-called bat fear that's spreading due to the pandemic -- and they're saying it's misguided. They're also warning bat catchers to lay off for a while.

TMZ obtained an email sent by Dr. Michelle Verant -- a wildlife veterinarian with the National Parks Service -- to her colleagues, warning them humans could potentially infect bat colonies here at home with a strain of COVID-19.

The email reads in part, "The actual outcomes of this scenario are unknown, but the concern is that it could result in sustained transmission of the virus among wild bat populations in North America, which could have consequences for the health of bats as well as humans." It goes on to instruct her colleagues who might be partaking in any bat-catching studies right now to refrain, or at the very least ... take great precautions.

Dr. Verant confirmed she sent the email and expanded by telling us there needs to be a clear distinction between the horseshoe bat (the species blamed for transmitting the virus in Wuhan) and North American bats. She says they're much different and there's NO evidence the virus lives in the American species.

To sum up Verant's concerns: Bats here are virus-free right now, but if they catch it from humans -- then there might be potential for them to pass it back to livestock or humans. Talk about vicious cycles!

Bottom line ... stay away from catching bats. Not that many of you were rushing out to do so. We hope. 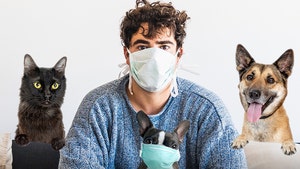