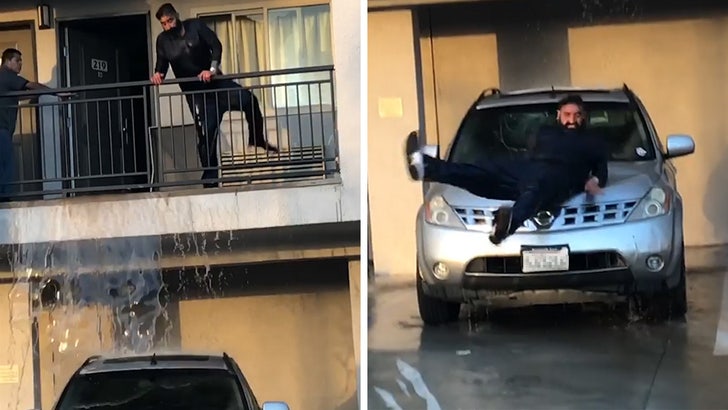 The guy who ran out of a flooding hotel room didn't only ruin the Nissan he jumped down onto ... we've learned he racked up major damages to the room!!!

The bizarre video started going viral Tuesday, and the backstory behind it is just nuts. According to the guy who captured the scene on video, the trouble started flowing around 7 PM at a Studio 6 motel in Commerce, CA ... just outside Los Angeles.

The person behind the camera, Prophet Amen Ra, tells us fire alarms were going off, but motel workers couldn't get into the room because it was locked. One staffer smashed a window to get inside, and once the door opened ... the water started gushing out.

The now Internet-famous jumper escaped a hotel employee's grasp ... and hopped over the railing to flee the second-floor by bounding down onto a Nissan Murano. Smart move ... he hit the car, dented the hood with his ass, and nearly smashed his head on the pavement.

We're told motel workers claim the jumper had turned on all the faucets in the room, and also busted pipes in the ceiling -- and the total damage was $10k!!! There goes his deposit.

L.A. County Fire and Sheriff's Departments both responded. Our sources say neither the car owner nor the hotel management wanted to press charges, and the guy said he had no malicious intent. He claims the room just flooded. Mmmmhmm.

The owner of the damaged car tells us she does have insurance and she did get the jumper's info, just in case this ends up in court.

What are the chances??? 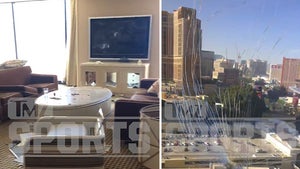 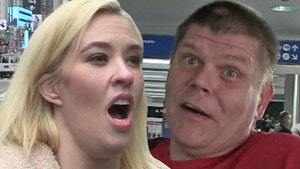