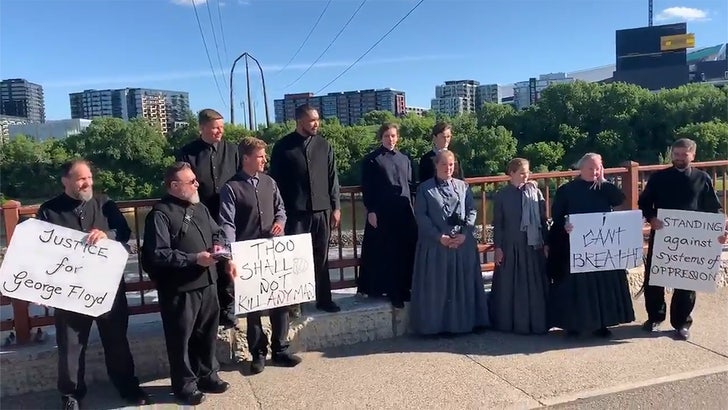 Looks like the outrage over George Floyd's death has trickled over to a part of society that doesn't usually hear about stuff right away -- yes, it's the Amish ... that, or their peaceful brethren.

A group of about 10 people dressed in Amish-esque garb (plain, old-fashioned clothes from the 1800s or something) were spotted out Friday in Minneapolis -- before the latest round of nighttime chaos began -- with signs showing solidarity with George Floyd protesters.

They were singing songs in a chorus together -- possibly hymns -- and a lot of them were holding signs that reflected what a lot of other protesters in town have been shouting at the top of their lungs ... "Justice for George Floyd." One sign said just that -- others read, "I Can't Breathe," "Thou Shall Not Kill Any Man," and "Standing Against Systems of Oppression."

They were getting rounds of applause from the crowd that had gathered around them, and a lot of surprised reactions online too. Many simply couldn't believe the Amish had even heard about George Floyd -- seeing how they're so isolated and technology-less and all -- which then led to some speculation that these good folks here might not be Amish at all.

Some people are speculating this group might be Mennonites -- which are slightly different from the Amish, in that they're allowed to use basic technology and usually pull up in actual vehicles as opposed to horse-and-cart buggies. Others said the might be mere Quakers.

Whatever guild they claim ... their presence was much appreciated by their fellow Minneapolitans.