3:33 PM PT -- Mike Norvell says he did NOT, in fact, speak individually with every player on his team in the wake of George Floyd's death ... and the head coach apologized Thursday to Wilson for saying he did.

"I'm proud of Marvin for utilizing his platform to express his reaction to my comments in an earlier interview," Norvell said. "Last Saturday evening, I sent a text to each player individually to present an opportunity for open communication with me."

"Many members of our team chose to respond and have more in-depth conversations about issues and feelings."

Norvell continued, "Marvin is right. It was a mistake to use the word 'every.' Particularly at this time, words are important, and I'm sorry."

11:28 AM PT -- Wilson just released a powerful video statement on the matter -- and while he didn't say if he's ending his boycott or even if Norvell acknowledged his accusations -- he said Florida State players will now take a big step toward helping the black community in America. 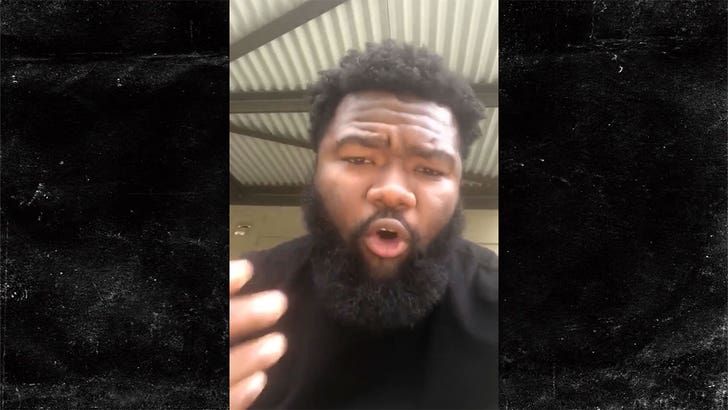 Wilson says after a meeting with Norvell and the team Thursday, all players on the Seminoles roster will now be registered to vote going forward.

Wilson says FSU players will also be heavily involved in fundraising efforts to not only help underprivileged people across the country, but locally in Tallahassee as well.

"Took a stand we got what we wanted & we are moving forward 🗣!!!" Wilson wrote along with his video statement. "I appreciate @coachnorvell for encouraging me to use my platform and speak for what me and teammates believe in."

Wilson added, "Be the change that you need when you was growing up and help build black communities up and take back what is ours."

FSU star Marvin Wilson -- a projected 1st-round pick in the 2021 NFL Draft -- says he's boycotting team workouts after he claims his coach lied about individually speaking with players in the wake of George Floyd's death.

"Me and my teammates as a whole are outraged and we will not be working out until further notice," the defensive lineman said Wednesday night.

Here's the backstory ... FSU head coach Mike Norvell was asked by The Athletic's Tashan Reed about how he's handling the unrest in America over Floyd's tragic death with his Seminoles team.

In his answer, Norvell was quoted as saying, "We've had a lot of open communication with our team, our players and our coaches. I went back and forth individually with every player this weekend."

#FSU head coach Mike Norvell (@Coach_Norvell) had individual conversations with every player on his roster this past weekend focused on the events surrounding the death of George Floyd. Here's his full quote to @TheAthletic: pic.twitter.com/eM3yZZH4db

"And that was something that was important to me because this is a heartbreaking time in our country."

But, shortly after the coach's comments were posted on social media ... Wilson called BS.

"Man this [crap] did not happen mane," 21-year-old Wilson wrote. "We got a generated text that was sent to everybody. There was no one on one talk between us and coach."

Several current FSU players -- many of whom returned to campus this week after COVID-19 closures -- backed Wilson's response with retweets and emoji quote tweets.

In another part of the statement attributed to 38-year-old Norvell, he added, "I told these guys just how grateful I am to be a part of this journey with them because they are the future."

The coach has not yet publicly commented on his star player's allegations.

As for Wilson, a boycott of FSU is serious business ... the team leader has a chance to be a top-10 pick in next April's NFL draft -- and is expected to be one of the best college football players in the country in 2020.