Dennis Rodman is still very pissed off at the looting taking place all over the country ... but he's now channeling his anger into action.

And, how's he going to raise the cash?! DINNER AUCTION, BABY!

"Dennis Rodman is so disappointed at all the rioting and looting in light of the tragic death of George Floyd that he's auctioning off himself for dinner for two lucky guests with all the proceeds going to benefit the Black Voters Matter Fund," his rep Darren Prince tells TMZ Sports.

The auction, going down on Charitybuzz.com, says Dennis, the winner and a guest will dine with The Worm -- and notes, "The winning bidder is responsible for the cost of the meal."

And, if you know Dennis ... who the hell knows what could happen at dinner? Quick trip to Vegas?!? Carmen Electra cameo?! 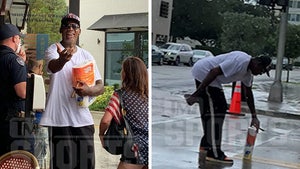