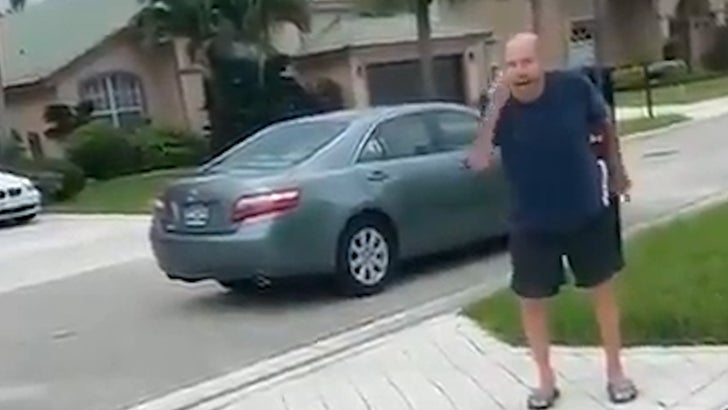 A white man accosted a trio of 15-year-old girls -- one of them black -- and threatened to call security and have them arrested ... and his tirade was caught on video.

The confrontation went down Sunday in Wellington, Florida, after the man began following the girls in his car as they were riding with 2 boys on a golf cart.

He was allegedly upset about the cart blocking him, but instead of going around he chose to tailgate them ... and continued following the 3 girls as they hopped off to walk to the home of Breonna Nelson-Hicks, the black girl seen in the video.

As you can see ... the man angrily accused the girls of not belonging in the development, then said he's going call the gate and have them all arrested. He added ... "You do not deserve to be in here."

When he started pleading his case to a neighbor, the girls chimed in and said he was going to hit them with his car. Finally, Breonna had enough and went in her house to get her grandfather, Tony Nelson.

Grandpa Tony eventually confronted the man about threatening the kids ... which he oddly denied, and that's where the video stops.

Tony's convo with the man didn't, though. He tells The Palm Beach Post they continued to talk and the man tried to defend his actions, but at one point talked about apologizing to the teens.

Tony says it was too late for that, though -- because Breonna was "hysterical" after the incident -- and he called the cops to file a report. The man did, as well, and claimed he almost hit the golf cart being driven by the teens.

Law enforcement says after looking into it ... no crimes were committed by any parties.

You Might Want to Rethink Kids Viral Controversial S#!T Police