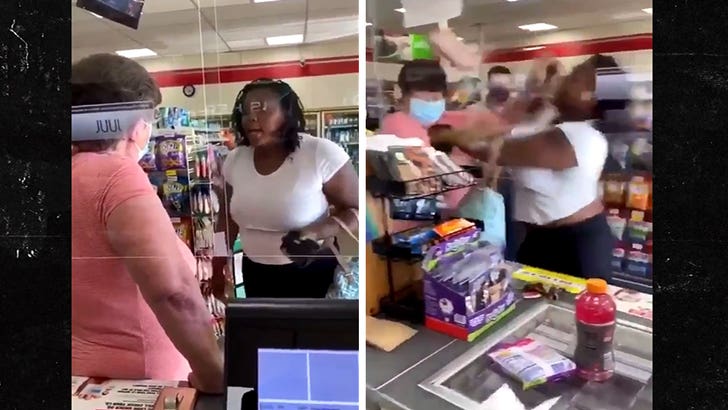 The woman who took the beating claims she did not initially use the n-word, and merely said, "excuse me" when the Black woman came in and stood right behind her. She claims the Black woman got pissed and called her a "white cracker bitch" before throwing items at her, which you can see in the video.

She admits repeating the n-word when the Black woman challenged her to do so. Again, that plays out in the video, and we gotta say ... not the smartest approach on her part. She says she reported all of this to police, but there's no activity in the case. No one's been arrested or charged.

11:21 AM PT -- According to the Sacramento Sheriff's Dept. ... deputies responded to a call of 2 females fighting at a 7-Eleven on June 22. When they arrived, the woman who got beaten up was being treated by medical workers for minor injuries, but the other woman had left.

We're told the injured woman told deputies it was a mutual fight and took responsibility for her part in it ... and said she didn't want to file a complaint. However, the next day she contacted cops and decided to file a report.

The Sheriff's Office says so far no suspect has been identified, charged or arrested ... despite the black woman's husband claiming on social media she was arrested for assault.

A "Karen" in Sacramento got her ass handed to her when she stupidly accepted a challenge to call a black woman the n-word ... and it's all on video.

The heated exchange unfolded this week at a convenience store in California's capital, where a middle-aged white woman started arguing with the black woman   ... and it quickly turned racial and violent.

It's unclear what started the confrontation ... the white woman insisted she'd only said "excuse me" -- but the black woman heard something different, so tempers were already high. Then, "Karen" dropped the n-word.

The black woman promised to beat the hell outta the white woman if she used the slur again and, for some reason, "Karen" took her up on the dare and said it ... loud and clear. That's when the punches flew ... haymaker after haymaker putting the racist woman down on her ass.

On social media, the black woman's husband is claiming she was arrested for assault. We haven't been able to confirm that yet.

The crazy scene is similar to another racist "Karen" getting slapped earlier this month inside a Phoenix gas station.

Bad as that was ... the Sacramento incident is way more violent.

You Might Want to Rethink Fights Viral Controversial S#!T