Here's the deal ... Giants fans were shocked when the switch-hitting infielder -- listed at 5'10", 268 lbs -- reported to camp last week looking like he let himself go during the offseason.

Pablo Sandoval is taking grounders at third base. His throws appear to have good carry. pic.twitter.com/Lrk5ltofyl

Sure, there's been some fat-shaming online ... but the big question -- how will the weight gain affect his performance on the field?

According to Kapler, 33-year-old Pablo is still playing like a world-class athlete!

"I think it's understandable that in today's world we focus on weight," Kapler said on Sunday according to MLB.com ... "I get it."

"In this particular case, what we've all noticed about Pablo is that the ball is jumping off his bat, and his throws have nice carry."

In other words, who cares what he looks like ... as long as he can produce, right?! 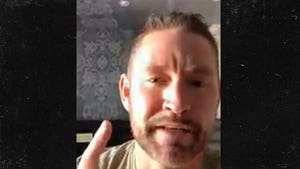 Aubrey Huff Unapologetic Over Tweets Despite Giants Ban, 'This Is Who I Am!'